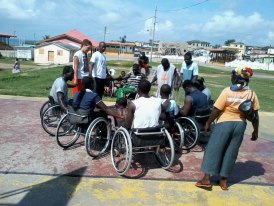 Pauline and team at close of practice

Two months and 5 days. That’s the time I’ve already been here for. I met so many people in this short time, it’s even hard to remember all their names. So if you already met me anywhere, it might happen that I have forgotten your name when we meet next time.

;people here have all nearly the same skin color and all of them have the same color of hair. At home(Germany), it’s easier to keep people in mind, because one has blonde hair, another has brown, red or black hair. At the school where I’m living and working as PE teacher, everyone knows me because I’m the only Obruni there. They call me Abena and even some of the parents, who heard their kids calling me like this, are using that name now. I often feel a little bit ashamed because I don’t know their names. But it’s just too much, I’m glad that I can keep the names of some kids in my mind. My „siblings“here, Junior, Teddy, Adorra and Andrey, are getting closer to me. As soon as I enter the flat they are running towards me and hug me. When we are sitting in the living room and watching TV, they always want to sit on my lap or beside me. Although they can be really noisy and exhausting, they are really cute. Mommy Irene is cooking for me in the evenings, and to be honest, I think she’s the one who cares most about me in the family. Daddy is working most of the time, which is ok because he has a lot of responsibility as director of the school. But sometimes I think the kids could need him for some more hours in a week. Especially the girl – she’s a little princess – is often crying for Daddy.

I think Daddy has realized that PE with the nursery isn’t working. For the last 4 or 5 weeks I only took KG1 up to class 5. But if you think, the older ones would be easier to handle…then you never tried to play ball with class 5 girls. The boys know how to catch and to throw a ball. They understand that they have to spread and use the space they have. But the girls are all running towards the ball and instead of playing together, they are fighting. They don’t know how it works because they never played when they were young. I learned how to catch a ball when I was a small child, maybe at the age of 4, and I started playing basketball at the age of 6. I think it’s because no one expects to be good in sports from a girl. It’s also the same I saw at the qualifying tournament in October. The boy teams where playing „normal“basketball. But the girls’ teams played like they had tried it maybe one or two times before.

Even in my wheelchair team the girls are in minority. I see it is not easy for the women to play with and against the stronger men. The guys have longer arms and are much stronger then the girls. But I also see that they are improving every practice. Last Wednesday we concentrated on the shooting. I showed them how the movement of the arm must look like: The ball has to be in front of you (not at the side as in handball), your elbow is under the Ball and it should be 90 degrees between you body and your arm and your arm and the ball. They were sitting in a circle and threw the ball over a short distance to the next player. We practiced it with both hands, started with the right and later with the left hand. Later we tried it with shooting at the basket. The best feeling a coach can ever have is to see, that his players try to do what they just learned. Even if it was hard for some of them to hit the rim or the board, everybody tried it. And you can imagine how proud I was when they made their shots from the freethrowline!!!

This weekend will be the first game. I’m so exited. To create some exercise for wheelchair basketball is easy: Taking an exercise from my own practice and change small details. But I have no idea what systems to play in a match. Do I just say: „Let’s plays a 1-2-2 or a 2-1-2“and let them play like in practice? Or is it necessary to show them how to cut into the zone or how to play a rotation? I think I’m going to concentrate on the basics: Try to play the long pass for easy points, spread to gain more room to play and come back to play defense as fast as you can.

Next week I’m going to tell you how the game went.