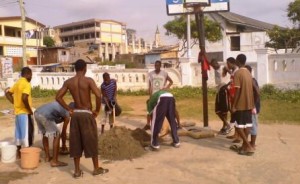 Hoops Care International began unofficially in 2005 when Claudius Thompson, now country director of HCI, came to Cape Coast on vacation. He had attended high school in the area, and was hoping to visit the basketball court where he used to play. The court had fallen into complete disrepair, and Claudius was unable to find a basketball in all of Cape Coast. He had a friend bring one in from Accra, Ghana’s capital located several hours away, and pulled together a group of kids to begin playing. The next day, Claudius decided to rest, but was soon met by the kids he had played with the day before. They had been expecting him at the court, and were eager to play again. Claudius came and went from Cape Coast over the next few years, and each time he was in town, met at the court to play with the youth of the community. After observing their lifestyles, Claudius decided to use basketball as a way to encourage the kids to more regularly attend school, maintain personal hygiene, and strive to do well in all aspects of their lives.

By 2008, Claudius had moved permanently to Cape Coast and decided to pair up with Jack Whitehead, an American recruiter working with Claudius to recognize talented youth from the area, Mike Speranza, an Italian-American planning to assist HCI in coaching, and Ingmaro Snabilie, a youth coach volunteering in the area, to found HCI officially and register it as an NGO in Cape Coast. While it originally began as an organization to empower youth through sports, HCI quickly grew to take on programs in health, education, and community care as well.

HCI runs multiple programs on a regular basis. The staff organizes daily soccer and basketball activities at nearby parks and schools, and hosts a monthly or bimonthly Malaria awareness campaign. HCI visits and teaches physical education classes at nearby schools, and frequently trains basketball and soccer teams. There is a community library in HCI’s office, where children and adults come for help in improving their

Just in recent months, HCI has coordinated Race4Peace, a 2.5 K run to encourage peace and tolerance in preparation for the upcoming election in Ghana, and hosted the 2012 Milo Junior Ball tournament, in which many schools around the area joined together to compete in basketball, dancing, and rapping. HCI has launched the “Girl’s, Girl’s Talk” group, taking place twice a month, to allow young girls from all around Cape Coast to discuss issues such as
HIV/AIDS, healthy relationships, and feminine hygiene under the leadership of local women and HCI interns. The programs and activities have been very well received and attended, and have made noticeable impacts on the community. HCI has high hopes for its current projects, and the ones it plans to take on in the future.levels of literacy. The organization has taken great interest in assisting teen and single mothers in the area. After a fundraiser completed by a group from Japan in recognition of the community’s struggle with Malaria, especially faced by new mothers and their babies, HCI was able to purchase a large amount of treated mosquito nets. HCI has already installed many of them in the homes of new mothers, and is still in the process of registering women in the area needing assistance, and providing nets for their protection. HCI has also partnered with handicapped community members to run weekly games of basketball for individuals in wheelchairs. In addition to these programs and regular activities, HCI frequently organizes and hosts large events to benefit the community.