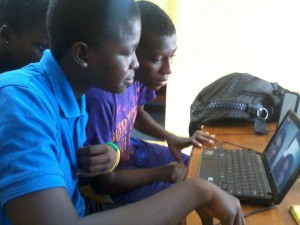 Ajata, Matilda and Ayisha during the GGT

On May 15, HCI Director made contact with the female basketball team Coach on Facebook regarding having his girls interact with our during our weekly GGT. After the coach met his girls and explain to them, his girls were very excited to be a part of the girls talk. But the timing was not right as the university was about to close for the semester. It was then decided the talk will hold the next semester.

As the saying goes, time wait for no man and we at HCI were glad when we were once again contacted that the Leicester ladies basketball was ready to talk with the girls. Finding a suitable time was then discussed and December 8 was chosen to take place at 11AM local time. Initially the date looked fine as it seems to be the day right after the general elections. But no one saw it coming, that the election will go two days of voting.

As a result of the second day of voting, many of the girls who were to attend the talk were unable to, either because of the limited movement during the time or they were among the small pocket of groups who were celebrating in various communities as the election results were been announced.

But three girls could not afford to miss the talk. All three been hard notch basketball players with huge interests in the sport. Ajata and Matilda who are two of our top female prospects and Ayisha, our youngest wheelchair basketball player. The three girls were in attendance and the call were made. At first the girls from both side got to know each other by names and ages. They then give small chat for about 15 minutes before the main topic of the day started. They discuss on the “misconception of female participation in sports.” our girls mentioned how many people tell them to stop playing that it would only make them manly and might be able to get married or give birth in the future. The Leicester girls then debunk such notion letting them know that actually sports fine tune the female making them much attractive. They also told our girls the many benefits in sports which can also lead to a career.

Our girls were taken through a video tour of their training facilities with our girls going ohhh and ahhh upon seeing what they dream of every time, which is better training facility to get better every-time.

Katrina Thomson of Leicester University on her Facebook page wrote through her Instagram, “Had a very inspiring and motivational Skype with some of the girls from the wonderful charity Hoops Care in Ghana!”

Hoops Care is looking to establish a strong partnership with the University of Leicester Ladies basketball team for future collaborative events.