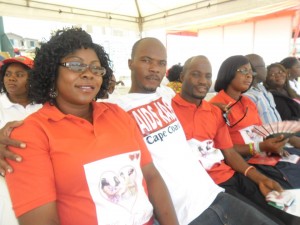 This years celebration was hosted by Cape Coast. The celebration came sooner because of the up-coming general elections on December 7th. The event was held at the Victoria Park and the theme was “Zero Stigma. Zero HIV Infection.”

Hoops Care was there not only to network  and meet new possible partners but to also unveil the AIDS RACE 2013 Banner and give more awareness of the event. Flyers for the race was distributed to most of the dignitaries in attendance as well as organizations representatives.

The event also was also celebration of the 10th Anniversary of the Ghana AIDS Commission.  Some of the organization in attendance included WAPCAS, Action for Rural Education, MARITIME, SWAA Ghana, Hope for Future Generation, Heart to Heart Foundation and a host of others.

The climax for the event was the cutting of the anniversary cake and popping of champagne.

During the course of the celebration, there were free screening, distribution of HIV/AIDS materials, such as manuals, condoms for both males and females and demonstrations on how to use them.

We at Hoops Care is optimistic that most of these organizations will also be present at the AIDS RACE 2013 to be held in Cape Coast and hopefully some other cities who are also showing interest by their rep who were at the event. The AIDS RACE Twitter account is http://twitter.com/AIDSRACE. Follow to remain updated. For further information on how you can participate or support this initiative, kindly email aidsraceghana@gmail.com