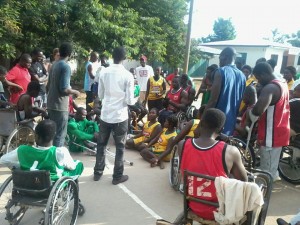 Hoops Care sees no limit when it comes to working with the community. Also there is no discrimination in choosing who to benefit from what. And that is what we see in our physically challenged athletes. We look at their abilities an not their inabilities.

On November 24, we departed Cape Coast for Sunyani for a wheelchair basketball friendly with the Brong Ahafo Regional teams. They are known as the best teams in the country as they comprise of national assets. The journey by itself was a challenge! We travel for eight hours to our destination. Some of those were making this journey for the first time, especially we the HCI staff.

18 athletes in total, male and female, along with four staff and two volunteers made up the entourage. Upon arriving in Sunyani, we went straight to the battle ground where we were met upon arrival by the team and coaches of BA. Some of the athletes were so anxious and there and then they started to scrimmage among themselves.

We later retire to our sleeping quarters. It is actually not too far from the Coronation Park, in a school call Twene Amanfo Senior High School. The night passed by faster then we expected as we spent most of the night chatting of the games the next day.

Game day came and the first match was against the BA ladies. Our ladies played well, but their opponents were much more organize and defended their home court by winning by 16 points margin. The men game follow and we all know this was the game to watch! Botchwe, Ghana most celebrated paralympian who represented in the London 2012 Paralympics captain his side to a well  deserving but hard fought victory.

One thing which stood out in their victory is that they are not only experience in the game of basketball but they also had superior official chairs for wheelchair basketball. We still use clinical wheelchairs.

The trip back home was more eventful then the one going. We had a flat tire around mid night and we all had to sit out on the express road. We got back safely to Cape Coast and stopped at London Bridge where each athletes were treated to drinks for refreshment.

Nonetheless, our training continue as we look to get better every time.