Posted in Health by admin with No Comments 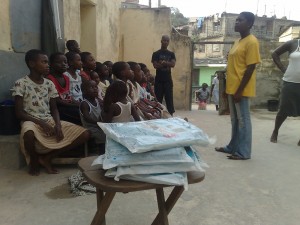 Hoops Care is following a couple of the participants of the ProGHAC Club in some selected basic schools in Cape Coast. Cecelia is from Methodist C and we monitor how she hope to go about in educating the youth. We took her to Amanful where she started by first getting the children attention by simply asking for their names and which school they were attending. Others sitting near by came closer an Cecelia decided to find a place to talk to them. An elder in the community offer her front yard and the children were given benches to sit on. Cecelia then asked them what malaria is and what causes malaria. A lot of the children could not relate malaria to mosquito bites but rather to hygiene. Cecelia educated them on malaria and its preventive measures. The children were then each given a bed net. Cecelia was able to follow a couple of them to their houses to hang but there were challenges she came up with. At the end of the day we ask her what she notice. First she stated that she could communicate with the  children easily and that they were also responding by asking her questions as well. She quickly added that immediate hanging of the net after donation was the major one. Most house hold could not get hold of hammer and nails and most times ropes to hang the net.

From our end we are optimistic that using children to educate other children relating what affects them can be very successful in ending malaria related deaths in the community. Children relate well to each other an are not shy to ask question no matter how far off it may sound to an adult.