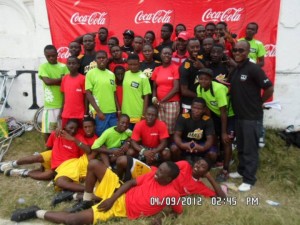 group photo of some of the players

Hoops Care was once again able to bring together youth from various parts of Cape Coast to compete in a fair and discipline environment. The tournament also brought out the wheelchair basketball team of Cape Coast to exhibit their talent as well.

In all, six teams were drawn in an all play all format. The communities representing included, eventual winner, Amanful, Bakanoo, Coronation, Kingsway, UCC and Hope4Girls.

The tournament started with the wheels4hope teams pulling in the crowd as a lot of spectators where already at the Victoria Park to witness the durbar of the chiefs.

We would like to thank Coca-Cola, Challenger Condom and AfriMalt for supporting this event.

See photos album of the event